This is a breakdown of the headsets (often called "head-mounted displays," or HMDs) that InsiteVR supports. If you're in the market for a first headset, or a new headset, this will hopefully help you navigate the differences and come to a decision!

First things first, there's some weird VR lingo of which you should have at least a rough understanding. This will let you quickly parse the differences between a mobile headset, like the GearVR or Oculus Go, and a desktop headset, like the Vive. 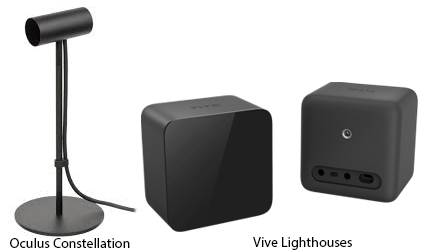 The Rift is a headset developed initially as a kickstarted project by Oculus, which later would be bought by Facebook. The Oculus Rift has outside-in 6DOF tracking.

The Oculus can track your position using two constellations placed in front of you. Oculus tracking, while good, has it's limitations. With only two constellations you are unable to turn around and face away from them without losing tracking. You can add a third constellation behind you for full 360 degree tracking.

The Oculus doesn't take up much space and is easy to setup. It's very useful if you're going to be using VR at your desk or for seated experiences.

Oculus also doesn't require being plugged into a power outlet - all it's equipment is plugged into your PC. This makes it really convenient for bringing into meeting rooms or events as you don't need to worry about plugging a bunch of equipment in.

The Oculus has built-in headphones and microphone.

Using the Oculus with a VR laptop increases the portability and convenience. This is a great setup to travel with as everything can fit in your carry-on. 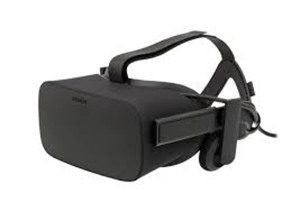 The Vive is a headset developed by HTC, a Taiwanese company also well-known for their smartphones. They got into the VR game in 2016. The Vive is an outside-in, 6DOF headset.

Using the lighthouses, which can be set up on stands or mounted to the wall, the Vive is able to track your position. This means that you can move around freely within the space between the lighthouses.

The tracking for the Vive is considered one of the best systems as no matter which direction you're facing the lighthouses can see you and therefore track you. On the flip side, the Vive takes up a lot of space and is more onerous to setup and breakdown. It's great for large, open spaces and as a permanent or long-term setup.

The Vive and the lighthouses need to be plugged into power outlets, in total it uses three outlets.

The Vive headset has an audio jack to connect your headphones and a built-in microphone. You can purchase the Deluxe Audio Strap that, in addition to being more comfortable, includes built-in headphones. 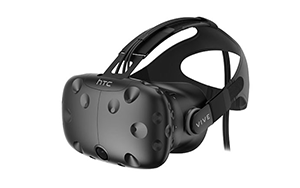 The Windows Mixed Reality headsets are the newest HMDs. Each is developed by a different hardware manufacturer but runs using Windows 10.

The Windows Mixed Reality headsets are only available on Windows 10, and require an update to the Windows 10 Fall Creators Update. This update can take some time, so if you intend to use a Windows headset on a new PC be sure you've left enough time for install before any important meetings.

All of these headsets are inside-out tracking and 6DOF. They track your movement without the need for external sensors, but do still need to be plugged into a PC.

These headsets are great for use at your desk or in a larger space. Not needing to setup external sensors for tracking also makes them great for travel and bringing to demos.

The Samsung HMD Odyssey is the most expensive option, but comes with headphones and a mic built-in, which is helpful for running meetings in VR.

The other headsets have headphone jacks and do not have built-in mics.

Similar to the Oculus, the Windows Mixed Reality headsets are easy to travel with especially when paired with a VR-ready laptop. Due to their inside-out tracking, you can also pair them with a VR backpack to have a full free-roaming VR experience. 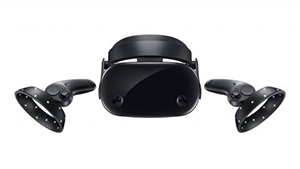 The GearVR is completely wireless, meaning it is a very convenient headset for meetings and travel. It's also the easiest for folks new to VR to pick up and use, in part due to it's limitations. However, due to running on a mobile processor it has less power than the desktop headsets.

When you're using the GearVR, make sure your phone is fully charged before you use it. It can really eat up your battery life.

Depending on the complexity of your models, the GearVR may or may not be a good choice for you. Mobile VR runs on mobile processors, meaning it is less powerful than desktop VR. Highly complex models won't render well, if at all, on the GearVR. Take this into account while looking for headsets to determine if it will work for you. 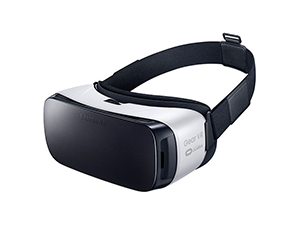 The Oculus Go is the much-hyped new mobile headset from Oculus. At only $199 a pop, it's super budget-friendly while being more powerful and convenient than the GearVR. These are meant for you to throw a few into your bag and bring them to your next meeting.

The Oculus Go is the first major "standalone" headset, meaning it requires no connection to a desktop PC and need no phone clicked into place to run. Everything you need to access VR is all there, in the headset.

Spatial audio is built-in to the headset, as well as a mic, meaning you need no additional headphones.

Like the GearVR, the Go runs uses a mobile processor. This means that while it is pretty powerful, it's nowhere near a desktop VR headset. You can upload somewhat complex models, but there is still a limit on complexity. Take this into account when you're looking for headsets.

The convenience and price factors are hard to beat, however, and even if you have a highly complex model it may be worth it to invest in a Go and use it to demo segments of your model.

We hope this overview has clarified the differences between the headsets InsiteVR supports!

If you have further questions about which headset(s) you should get, feel free to ping us on Intercom or send us a message at support@insitevr.com.